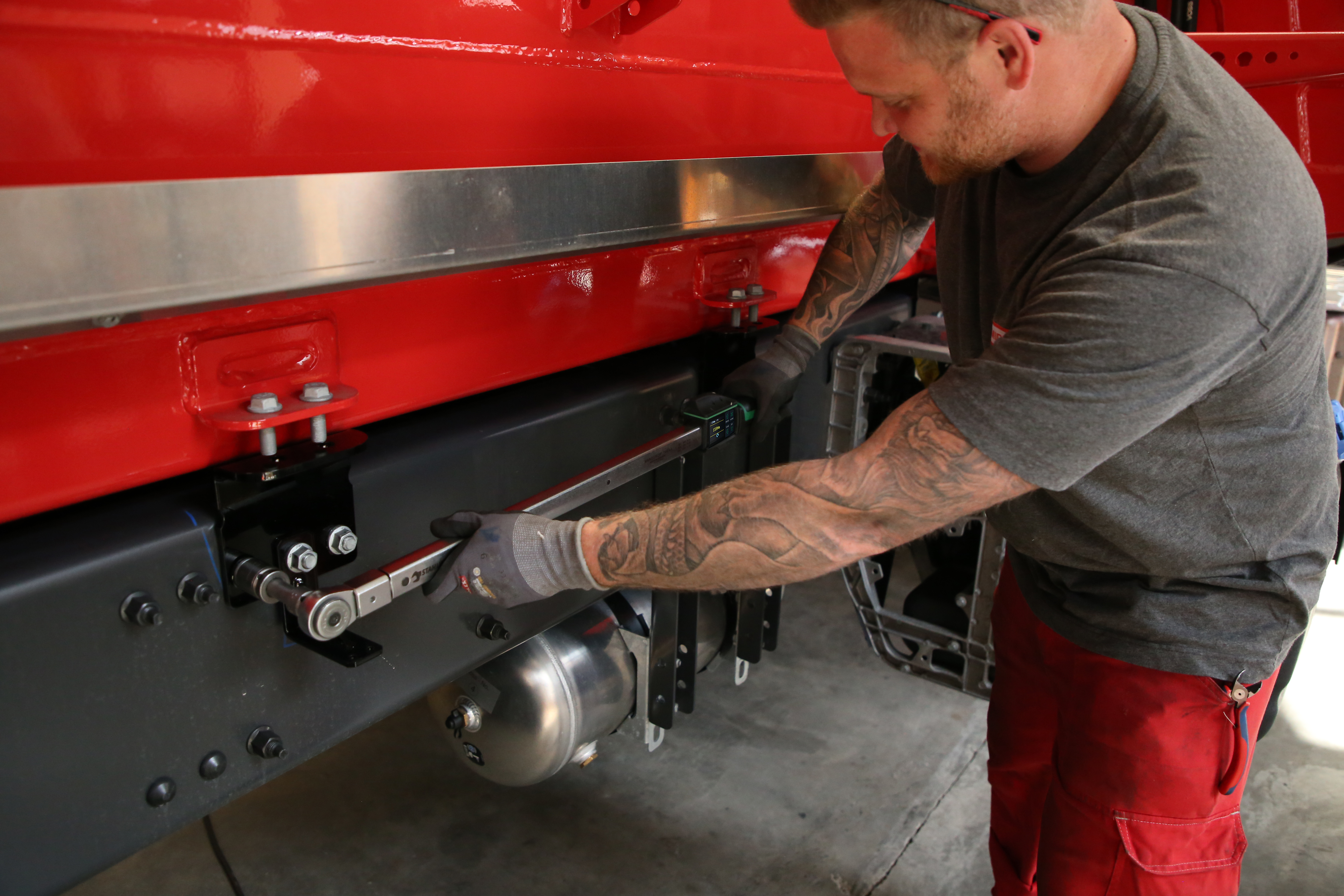 With a workforce of around 500, Rosenbauer, in Karlsruhe, builds more than 190 vehicles every year for fire-fighting and disaster relief. This requires the highest levels of quality and uncompromising dependability – in an emergency, personnel must be able to rely 100 per cent on the technology. In order to be able to meet the ever-increasing challenges of the future, electromechanical radio-linked torque wrenches from Stahlwille are used in production. The benefit of these tools for users is that they can be fully integrated in a software-supported process control system for assembly workstations. A key feature is that digital logging of the bolted joints is fast, simple and automated.

At the facility in Karlsruhe, the assembly of turntable ladders and aerial rescue platforms is characterised by a host of individual solutions and a high proportion of hand-operated fastener-tightening operations. "A large number of bolted connections have to be carried out in a specified sequence and with a precisely defined torque," explains Torsten Schuster, Production Planner International / Head of Work Preparation at Rosenbauer Karlsruhe GmbH & Co. KG, in summarising the situation.

In this context, each individual employee has a high degree of responsibility for self-monitoring. An incorrectly tightened fastener can have an effect on the functioning of the entire system – with consequences in terms of the costs of warranty services and complaints. This deficit can be counteracted by the use of digitally defined fastener-tightening processes because this makes the learning curve manageable and guides the worker accurately through the specified procedures. "With Industry 4.0 solutions from Stahlwille, we are making the fastener-tightening operations during assembly in production environments safer and more dependable, and can also log them as data quickly and easily at the same time. This enables us to offer our customers verifiable quality at a consistently high level – an important selling point for us," says Schuster.

When those responsible for finding a solution that would fully meet Rosenbauer's requirements surveyed the market, various offers were examined. "The decision to opt for Stahlwille was made together with the employees on the shop floor," Schuster recalls. "It was very important to us to involve our employees early on and give them the chance to familiarise themselves with the new tools and how to use them." As a result, there was the opportunity to work with the new technology in a project phase lasting several weeks during which the concept's practical suitability was tested.

There are now three workstations at Rosenbauer's Karlsruhe site and another in Italy that are equipped with the Manoskop 766 Daptiq torque wrench from Stahlwille. This tool is the only one on the market that works electromechanically: it measures digitally, can be integrated wirelessly by WiFi and can both receive and transmit data. "What our employees particularly like about this torque wrench is that it trips with the typical click of its mechanical counterparts," Schuster reports. This is an important criterion in noisy production environments and when working where the visual display on the wrench may be obscured.

At Rosenbauer, the torque wrenches are directly integrated in the ProTight worker guidance system. When a fastener-tightening process is initiated, the tool receives its data from the worker guidance system via radio transmission and the required torque is set automatically. In the specific case of Rosenbauer in Karlsruhe, the processing sequence and the assembly points are displayed on a large-format monitor beside the workstation. The wrench signals three times whether the tightening operation has been carried out correctly and the specified target torque has been reached – by means of an LED traffic light system, the digital display and the familiar click. The system also detects whether fasteners have been overlooked or tightened twice. Error messages cannot be ignored.

Completed operations are reported back to ProTight in real time in a traceable and loss-proof manner, logged with a time stamp and the exact torque, and the result is visualised on the monitor screen at the workstation, which ensures seamless traceability at all times. The Manoskop 766 communicates with ProTight through Stahlwille's open source interface, which makes it particularly easy to transfer and store joint data and make it available for evaluation purposes.

The Manoskop 766 Daptiq was quickly integrated in Rosenbauer's existing system environment. On site, it took about two days to set up the first station. "However, this involved work tasks that are only required once," explains Alexander Grosser, Project Manager Industry 4.0 at Stahlwille. The time required for subsequent installations is significantly reduced because the system is very easily scalable. "In many cases, less than one working day is required at the customer's site. And once installed, it all runs automatically," Grosser continues.

"Process capability has increased significantly with the Stahlwille solution," reports Schuster. "At the same time, our workers have been relieved of much of their previous responsibility and freed from time-consuming routines." Familiarisation with new projects is easier and faster. The probability of human error and incorrectly executed fastener-tightening operations has been significantly reduced. Last but not least, computerised processes reduce the effort associated with creating and maintaining paper-based work instructions. "We are pleased to be able to say that we have fully achieved our defined goals," Schuster enthuses. This solution has potential. "Our production staff prefer the use of Stahlwille's torque tools in combination with process-controlled worker guidance and logging to all other options when it comes to manual tightening jobs, and have specifically asked when we plan to introduce more of the workstations."